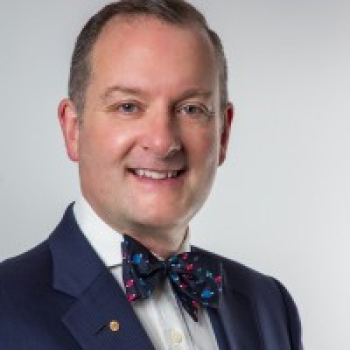 RDO was delighted to interview Commissioner Leigh Johns OAM from the Fair Work Commission about workplace and employment dispute resolution.

Commissioner Johns was appointed to the Fair Work Commission in 2013. Prior to his appointment he held senior roles in the Commonwealth Government and, before that, was a lawyer in private practice. Commissioner Johns is an accredited mediator and has a keen interest in online dispute resolution.


If you could meet any historical figure, who would you choose and why?
Jesus. He has had such a large impact on Western civilization and in my own life.


If you could meet any living person for a chat over a shared dinner, who would you pick and why?
Queen Elizabeth II because her breadth of experience over 70 years on the thrown has been extraordinary.


How did you end up in your current role?
I studied law and economics at university and then spent 14 years in private legal practice. In 2007 I came to government as the Chief Counsel of (what is now) the Fair Work Ombudsman. I then spent 3 years regulating workplace laws in the building and construction industry before being appointed to the Commission by the Gillard Government in 2013.


What would a day in the life of a Commissioner look like?
It can be very varied depending on the matters that have been allocated. A large part of our work is unfair dismissal cases. A usual day will be filled with conciliation conferences trying to assist parties to resolve disputes as between themselves.


How do you/FW use ADR in your current cases?
There is a heavy focus on ADR. ADR gives parties in dispute the opportunity to work through disputed issues with the help of a neutral third party (a member of the Fair Work Commission). It is generally faster and less expensive than an arbitrated hearing.


How useful is conciliation/mediation in employment dispute resolution?
Very useful.
Do you use such methods?
All the time.
Why is it so useful to Parties in your experience in the employment sphere?
It is useful because it enables the parties to control the outcome of their dispute. They have ownership over the outcome. It is also confidential and a certain outcome.


The pandemic accelerated the need for virtual hearings. What has been your experience of virtual hearings?
I have been very impressed with the online hearing environment. It has some many advantages. Online hearings can be more accessible and efficient. They reduce travel time to court and result in costs savings to litigants.


What tips would you give around conducting online hearings?
Make sure you have a quiet and private location to participate from. Ensure there is sufficient internet connection for your device. Test your technology in advance of the hearing. Ideally use a headset rather than the in-built microphone. Mute yourself when not speaking.


What do you see as the future of employment/workplace dispute resolution over the next 5 years?
I think there is enormous capacity for online dispute resolution through AI. I can see a time when the vast majority of unfair dismissal applications are resolved through online mediation without the need for a human mediator/conciliator. The facility already exists for this to occur. More tribunals could run pilots to test effectiveness and user experiences.